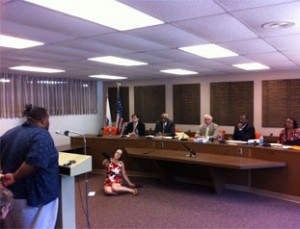 The Muskegon Heights Public School Academy Board of Directors, meeting for the first time Monday afternoon, followed a recommendation by Emergency Manager Donald Weatherspoon to award a contract to Mosaica to operate the K-12 charter school system. Weatherspoon previously selected and gained state approval to form a charter school system in response to a financial emergency in the Muskegon Heights Public Schools.

Mosaica and the Leona Group, which operated the former TriValley Academy in Muskegon, were the two companies Weatherspoon said had expressed interest operating the charter district. A third withdrew its interest.

Parents have the choice of sending their children to the Muskegon Heights Public School Academy, a different charter school in the area, a private school, or to a public school willing to accept transfer students. Officials have said Muskegon Public Schools appears to be the only district accepting transfers.

Emergency Manager Donald Weatherspoon said Mosaica was selected because of its curriculum, commitment to work within the community and a willingness to create a K-12 system.