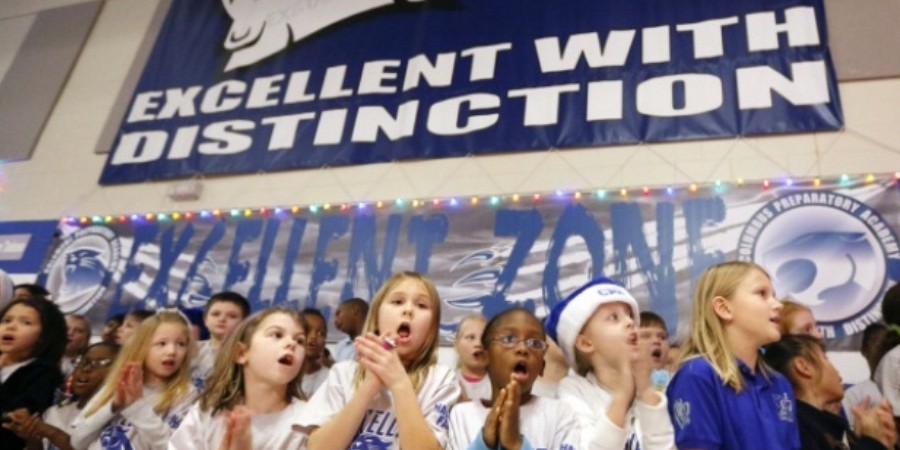 Many a Buckeye would characterize Columbus Preparatory Academy (CPA), a K-8 Ohio public charter school, as an extraordinary success.  The Ohio Department of Education is among this proud group given it has recognized CPA as the highest ranking school in the state and has awarded it its top rating, “Excellent with Distinction,” four years running (2011-2014). Combine this with the state giving the school Straight A’s in every performance category for the past two years and CPA presents the image of scholastic success, one where student performance is superior, consistent and measurable.

But by no means is such acclaim limited to Ohio. On September 30, 2014, the U.S. Department of Education officially honored CPA as a 2014 National Blue Ribbon School. The public charter school managed by Mosaica Education was specifically recognized in the category of ‘Exemplary High Performing Schools’ with the following statement on the National Blue Ribbon School website (http://nationalblueribbonschools.ed.gov/awardwinners/): “The students at Columbus Preparatory Academy are living proof that through rigorous coursework, high expectations, and immersion in a positive learning environment with caring, committed professionals, all students can achieve at high levels.”

Still, the CPA story is much more than rigorous coursework and an admirable increase in test scores could ever capture. For test results are only one indicator of the overall performance of an educational institution and the identity-seeking students that comb its bustling hallways. Test results alone cannot convey a feeling or an emotion; nor can they reflect a human connection or tell a story. And to better understand CPA’s current success, one has to take into account what the school once was.

Not long ago, the word “success” was seldom, if ever, mentioned in the same sentence with Columbus Preparatory Academy. For the 2005-06 academic year, the struggling school was given “Academic Emergency” status by the Ohio Department of Education, the lowest ranking in the state. CPA’s former administration was unable to effectively serve the educational needs of a Columbus-area population with three-fourths of its students economically disadvantaged and eligible for free or reduced lunch. The school and its staff were further overwhelmed by random violence and disorder.

“It was terrible,” recalls CPA Head of School, Chad Carr. “Behavior was out of control and, though there were great teachers, they had no support and no one understood curriculum or the state test.”

Enter Mr. Carr and Mosaica. In 2007, the motivated Mr. Carr jumped in with both feet using his proven leadership skills and the Mosaica model as his primary tools for change. Along with reorienting CPA’s existing teachers to a “No Excuses” attitude and Mosaica’s 8 Pillars approach (http://mosaicaeducation.com/paragon/our-pillars/), Mr. Carr implemented policies that prioritized professional development, school discipline and safety, immersive learning, ongoing goal setting and monitoring, and more effective staff placement. Additionally, the Mosaica Education Paragon™ curriculum breathed new vitality into the educational process, engaging students through the integration of Humanities with math, science, technology, and the arts. Mr. Carr also established an emotional and uplifting tone for the school, one best described by his maxim of choice, “Its winning time.”

And now ─given the 2014 National Blue Ribbon honors─ the nation has taken notice. No surprise to Mr. Carr, who sums up the extraordinary transformation process that turned a struggling, poor performing institution into a high achieving and nationally celebrated school.

“It was about the teachers, supporting them and teaching them about curriculum and achievement,” says the CPA leader, humbly deflecting attention from his own obvious impact on the school. Clarifying that failure was never an option, Mr. Carr goes on to contend the transformation was also a matter of ditching the school’s former losing attitude and “speaking about winning while focusing the students on the goal of being the best school in the US.”

Thanks to Mr. Carr, his committed team, his students, and the Mosaica model, CPA just might be.